Like any moving part, our joints need proper setup and ease of movement in order to function well. If the joint begins to grind against itself or something begins interfering with it, the effort to perform becomes more difficult and painful. The feet are heavily dependent on joints, with more than 30 opening the way for a wide range of movement. When arthritis begins to attack and inflame one of these joints, it can have a significant impact on one’s quality of life. 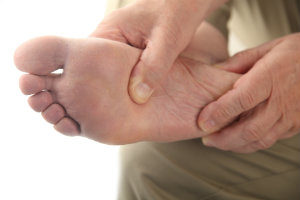 Arthritis is not a specific condition in itself, but a broad umbrella under which many joint-damaging conditions are placed. Multiple forms of arthritis exists, some of which are more common than others. All of these forms share the common potential of causing pain and impeding the activity of an affected joint.

A typical joint is composed of two connecting bones with supporting muscles, tendons, and ligaments. A smooth and slippery form of cartilage exists where bones would meet to ease movement and prevent the bones from grinding against each other. A thin lining called Synovium produces a lubricating fluid that aids the cartilage in its role.

When everything is in working order, a joint is a highly efficient machine. Arthritis of the foot and ankle disrupts this order in various ways. Pain from an arthritic joint tends to build gradually over time, but may flare up with heavy activity. Swelling, redness, and warmth might also be apparent, and might increase after long periods of sitting or resting.

Common Forms of Arthritis in the Foot and Ankles

Of all cases of arthritis found in the foot and ankle, the following are among the most frequently seen:

Osteoarthritis – Known as a “wear-and-tear” form of arthritis, the cartilage that protects a joint degrades over time. As it wears out, the once smooth tissue becomes rough and thin, and eventually the bones may begin to rub together. Osteoarthritis is more common in older people, but family history and obesity can also play factors in its appearance among younger people as well.

Posttraumatic Arthritis – Similar to osteoarthritis, this form follows a previous injury to the joint. The time it takes for this kind of arthritis to be detected after its source injury can be years, but a joint that has been dislocated or fractured in the past is about seven times more likely to begin seeing a breakdown of cartilage.

Rheumatoid Arthritis – Instead of a mechanical wearing down of a joint, rheumatoid arthritis is a disease that pits the body’s own immune system against it. The synovium that surrounds and aids a joint is attacked by immune cells, causing the lining to grow inflamed. As time passes, this causes damage to the surrounding bone and cartilage, and in some cases even the surrounding ligaments and tendons as well. Rheumatoid arthritis has the potential of causing serious deformity in the joint.

Gout – Gout is infamous for causing burning, flaring pain in the big toe, but can feasibly happen in any joint. The form of arthritis causes crystals of uric acid to form and build against a joint. Pain tends to come in the form of a “flare” that starts at night and can last a number of hours.

Arthritis has no cure, but it does not have to rule more of your life than it can. Treatments are available in many cases to help relieve pain, slow progression of the disease, and maintain as much mobility as possible.

Treatments for arthritis can include physical therapy, medication, custom orthotic devices and, in some cases, surgical treatment. The best treatment plan will depend highly upon the form of arthritis found and the needs of the patient.

If joint pain has become part of your daily life, don’t let it continue unaddressed. Dr. Kevin Powers of Bloomington can help you form a plan to better manage the discomfort and enjoy a less restricted life. Schedule an appointment with our office by calling (812) 333-4422 and let’s get started.