The Link Between Diabetes and Foot Health

We may have just gotten out of National Diabetes Awareness month, but this disease needs to be given attention all year long. The number of Americans living with diabetes is staggering (29 million) and, even more concerning, it’s climbing. Effects on the body from the disease can be found, literally, from head to toe. It might be easy to think about ones like increased risk of heart attack, kidney failure, and potential blindness, but it would be a mistake to look past the link between diabetes and foot health.

Diabetes is a condition that develops on account of excessive blood sugar levels in the bloodstream. This happens when the body either doesn’t produce enough insulin—a hormone that allows the body to properly absorb and use sugar (glucose)—or it is unable to use the insulin effectively. In some cases, both of these problems exist at the same time. 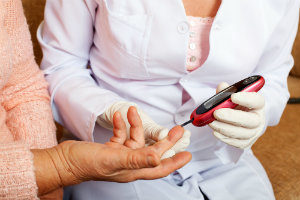 The excess glucose in the blood can cause problems for most of the body’s organs and nerves. As we look at how diabetes affects foot health, skin is a central organ in the big picture.

Changes to the skin in the lower body can be an indication of a diabetic condition. These include more frequent callusing, increased itching sensations, loss of body hair, and shiny, thinning skin. Callusing is of particular concern since a callus can break down over time and become a diabetic ulcer.

Diabetic ulcers are extremely concerning. Ulceration is a breakdown of body tissue, which often results in open sores and wounds. These enable microorganisms (bacteria, fungus) to enter the body. Diabetes impairs the body’s ability to fight off infection, and a potentially serious situation can arise – gangrene. Gangrene is tissue death that cannot be treated. Instead, dead tissue needs to be removed in order to prevent it from spreading. Accordingly, this is a leading cause of lower limb amputations.

Two major conditions that play a role in diabetes and foot health are diabetic neuropathy and peripheral arterial disease (PAD). Neuropathy refers to the nerve damage that has taken place on account of the heightened glucose levels. This can leave an affected individual unable to tell when an issue exists, which then can lead to the problem worsening. PAD is a condition wherein blood vessels have become constricted and do not allow tissues to receive the oxygenated blood they need.

Diabetes can lead to severe consequences and problems for your lower limbs. If you live with this disease, come and see us as soon as possible so we can help you create a diabetic foot care plan to keep you safe. Schedule your appointment with our Bloomington, IN office by calling (812) 333-4422.