If you haven’t already started doing so, it’s about time to start thinking about the upcoming Halloween holiday. For various reasons—like parties and taking children trick-or-treating—you might dress up to celebrate with friends and families. No matter your costume of choice, you don’t want to experience pain and discomfort...
Read more

We had some fun in our last blog discussing some of the “treatments” people have tried in the past to cure their plantar warts. While “wart whispering” and rubbing snails against your feet have thankfully faded into obscurity, it’s time to get serious. What plantar wart treatments actually...
Read more


The Many Myths of Plantar Warts 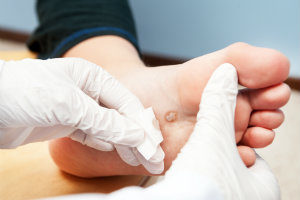 As long as people have had warts, they have come up with all kinds of crazy reasons why these bumps have appeared or vanished on their skin. Whether plantar warts on the feet or anywhere else,...
Read more

Yes, we know that the “Keep Calm” meme has been overused by now. You can find fake posters telling you to keep calm while doing everything from eating chocolate to killing zombies. But when we say to keep calm to prevent stress fractures, we’re actually providing some real advice. The...
Read more

Before you know it, the weather’s going to heat up and it’ll be time to hit the community pools! Probably. Hopefully? Maybe. If you do get a chance to hit a public pool this year, it’s worth taking a moment to think about what you can do to prevent athlete’s foot while you’re...
Read more

Live from our studios in beautiful Bloomington, Indiana, it’s the new quiz sensation everyone is itching to play! Don your shower shoes and break out the calamine lotion, it’s time for: Name! That! Rash! Well, maybe the name of the show needs some work. The truth still stands that rashes...
Read more


Preventing Friction Against Your Feet

Everyone generally agrees that things are much more pleasant when they’re running smoothly. Abrasiveness is a hard thing to endure for a long time, and we only need to look to the current election cycle for evidence. You’re likely not running for office, but you are running around town....
Read more


How to Punish Corns with Pumice

When considering the tools humanity has mastered over its existence, those made of stone rank among the first we likely mastered. However, that doesn’t mean there aren’t still some things we can learn about using them, especially when it comes to a special type like pumice. It might not...
Read more


Don’t Get Callous over Calluses

Time for a quick English lesson—wait, don’t go! It’ll be fun! You might have heard people say not to “get callous” over something. Does that mean not to grow a nasty, thick patch of skin? Not quite. That’s a callus. See the difference? “Callous”—with an “o”—is a related word to...
Read more


What You Can Do to Shrink Your Cyst

It’s time for Bloomington to get ready for Halloween! After getting in the mood with the Festival of Ghost Stories Oct. 30, you can go out with your little ones on Oct. 31 to bring home a candy haul. If you’ve developed a bump on your foot that isn’t...
Read more